In this blog, I want to show road rage has no age limits, as you will see with “Threats by Road Rage Grandma.” In my upcoming book on conflict resolution titled, “DISARM DAILY CONFLICT – Your Life Depends on It,” I dedicate a chapter to the topic of road rage.  Road rage is one of the most emotionally fueled conflicts people often find themselves in.  While there several issues regarding conflict resolution you can see in this video, the primary one I want to address is her threatening to use video evidence against him.  It has now become common for people to pull out their cellphones to record incidents while driving.  They then gain proximity, whether side by side at a traffic light or yelling back and forth from their cars at high speed. 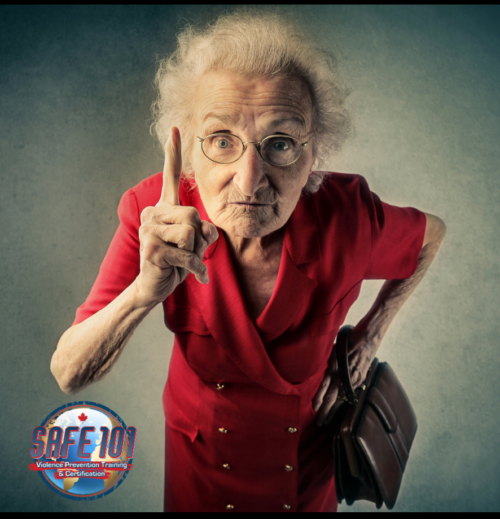 I understand having a video of some crime can be valuable, but leave it to the police to confront the person. The woman in this Instagram Video is swearing, finger-pointing and threatening to call the police. Similar actions I have seen in other videos have resulted in the accused pulling out a gun and shooting the other person.  You have no idea who you are confronting and what they are capable of.

She is yelling “I got a camera!” as if he will be intimidated by her.  Verbal intimidation often leads to physical violence escalation.  Threatening someone with words or your cellphone has virtually zero chance of accomplishing anything but an escalation in the potential for violence.  Accompanying the threat of the video is usually body language, words and tone that are aggressive, challenging, and commanding as you can see.

Despite her actions, the man responds with a calm demeanour and nothing more than a couple mildly sarcastic comments.  I do not know him, but maybe because she is older is why he restrained himself, but if it had been someone younger, he might have reacted very differently.  She has no idea how, with a different person, she may have come close to serious injury.

Also, I have seen videos where the two parties are yelling back and forth with one or both beginning to use their vehicle as a weapon.  Now you are putting other drivers on the highway at risk. I posted a video recently of a couple showing their video to the other driver in a threatening manner while their child was in the backseat.  When he responded dangerously with his car, they began yelling they had a child in the car.  If you have a child in the car, do not be stupid and attempt to take the law into your own hands.  Driving, recording, yelling and threatening while angry is a recipe for disaster.

If you are hell bent on recording someone, do it discreetly, safely and then get somewhere safe, stop the car and call the police.